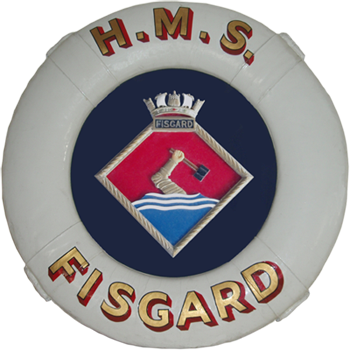 Fisgard's divisional system in its 1980s form was created in 1966, when the establishment's eight divisions named after famous naval figures were consolidated into four new ones, Bennett, Cooke, Frew and Lane. Each of these divisions was named after a former apprentice who had risen to flag rank.

In 1972, due to the rising number of apprentices being recruited, two more divisions, Shepherd and Tribe, were created; and in the spring of 1973 two more, Griffin and Spickernell. However in 1974, Cooke and Shepherd divisions were disbanded leaving the six we know plus Harcus Division, used only for direct entry artificers.

When the initial training of artificers started to move to HMS Raleigh, and apprentice numbers in Fisgard fell, divisions began to be closed down. Lane and Bennett were the first casualties at the end of the Spring Term 1983; Spickernell, Griffin, Frew and Tribe closed at the end of the Summer Term 1983 when 823 entry passed out.

For HMS Fisgard's final term in late 1983, all of the remaining apprentices of 831 entry were divided between the two reformed divisions of Shepherd and Cooke; both residing within the west side accomodation blocks.